The Golden Guardian - The Shield of Sextus Varius

The Golden Guardian – The Shield of Sextus Varius 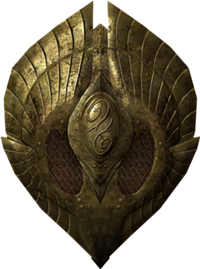 This enchanted iron shield was worn by the Delian Knight Sextus Varius during the Great Chaos Incursion of CY57. It protected him as he battled hundreds of demons and fell chaos creatures. During and prior to battle the shield will whisper warnings to a good hero wearing the shield. The shield was enchanted by the high elves of Ulthan several centuries ago. Late in the summer in CY517, the shield was recovered by Vaylin Gildorran, a half-elven paladin, from the tomb of Sextus Varius. The shield was gifted to Vaylin by the spirit of the fallen knight.

The Golden Guardian - The Shield of Sextus Varius