Korm is a well muscled Dwarf
wears no armor save his Black steel greaves / vambraces .

Hair is mid length worn pulled back behind his head.
Beard is down to his chest when braided in two braids.

Korm’s primary weapon is Obsidian Death – Battle Axe of Malador Dox and Shield. He uses handaxes as thrown weapons and a Spear for standing against charges.

Personality Trait
Have my own ideas about what is food. Eating habits of those around me are fascinating, confusing or revolting.

Ideal
Inquisitive-Everything here is new to me. I want to learn

Flaw
Beer or any other brewed Alcohol. I like to drink….alot!

A dozen Stout Dwarven warriors gathered in the cavernous Hold at Karak-Gronk. Before them stood and aged and grizzled Dwarven King. The King, Unmar Trollaxe, ruled the council of 12. His Kingdom on the far eastern reaches was beset by numerous humanoid races, always trying to uproot the Dwarves of Karak-Gronk. The King had 12 hard Dwarven Nobles called simply “The Danes”. Each Dane provided a stout Dwarven warrior every year for the “Slayer Ritual”.

Assembled before their King were the 12 Danes selections. Stripped of armor, save greave, vambrace and shield, each was armed with weapons of their choosing. Hair, beard and kit wrapped tight to their bodies, they formed around the King. Unmar Trollaxe’s voice bellowed and echoed throughout the great hall as he addressed the “Dirty Dozen”. “You are Chosen!” “Your names will be unknown to all save one!” “This Sacrifice has been sought by you!”

Here is your Oath
“Death and Destruction.”
“Bringers of Doom to enemies of Dwarvenkind!”
“We seek to battle to find Trial by Combat.”
“Our Death has purpose.”
“Our Crusade Begins.”

The 12 were each given a compass direction and the instruction to find and kill “The Enemy” Unmar Trollaxe unceremoniously walked through the Dwarves gathered around him and grasped them by the shoulders, each in turn. When he was done he left the great hall. The 12 left the hold. Korm Blackbrew Howled at the wind as it bit through his cloak. He imagined the battles he would fight. He dug his heels into his War Boars flanks and trotted West. 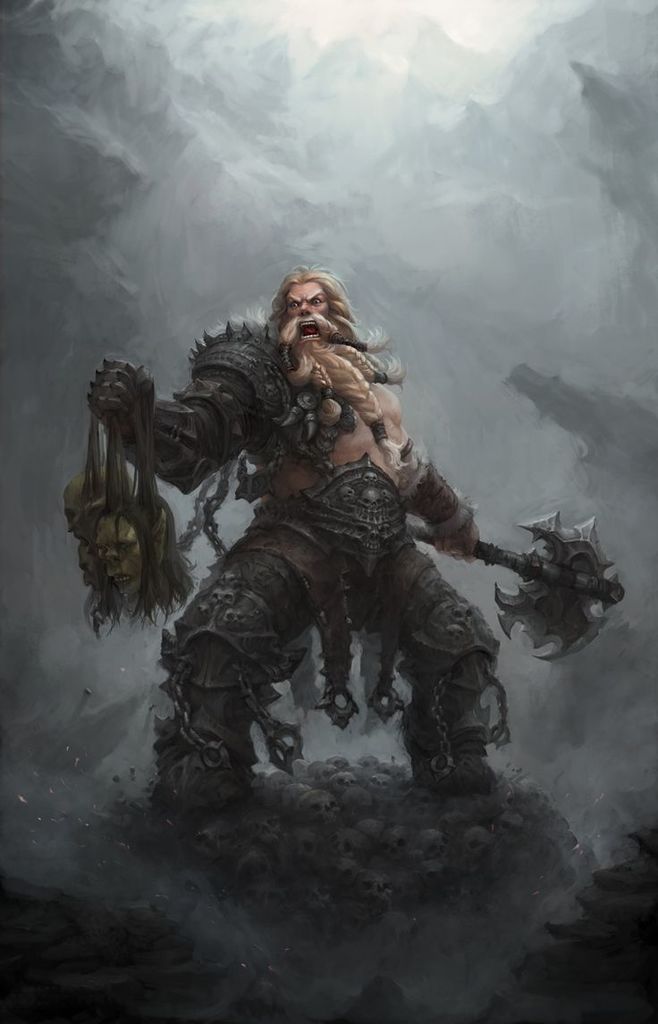