Personality Trait
I have a strong sense of fair play and always try to find the most equitable solution to arguments.

Ideal
Sincerity. There’s no good in pretending to be something I’m not. (Neutral)

Bond
I protect those who cannot protect themselves.

Flaw
I have a weakness for the vices of the city, especially hard drink.

Background
Einar was born twenty five years ago on a small farmstead outside the village of Hommlet. His childhood was simple and peaceful. As the son of Erik and Haldis Reykr, modest homesteaders, and brother of Ailla he grew up learning to work the land and care for the stead’s animals. By his teen years he grew weary of the farmer’s life and so spent his free time in Hommlet talking to travelers, mainly the dwarven caravanners where he picked up their language. At this same time his best friend in Hommlet, Aelric, began to spend more time at the farmstead slowly courting Ailla.

On a beautiful summer evening Einar, more than a little drunk, merrily walked through his father’s fields, returning home from a night drinking and singing with the dwarves. In the distance he could see Ailla and Aelric sitting on the small stone wall that surrounded the homestead. Though it was hard to see in just the moonlight the duo appeared to be locked in a heated embrace. He smirked and was about to change direction as to avoid the pair when a inhuman, primal scream tore through the calm. He watched his sister and friend tumble from the wall then warily peek over. A shape appeared in the dark threshold of the longhouse its gnarled talon tipped hands gripped the doorway before thrusting itself fully into the moonlight. It paused for a second sniffing the air before its gaze locked onto the two heads peering from behind the wall. Aelric jumped to his feet and dragging Ailla with him and they began to run. The creature unleashed another horrifying wail then charged after them.

Einar’s pace quickened to a sprint as he pulled his axe from his belt his smirk replaced by a snarl. Both he and the creature were almost on the pair when Ailla caught glimpse of her brother.

Ailla and Aelric quickly complied diving for the ground as Einar’s axe hurled between them, impacting the ghoul’s chest with a sickening thump. The creature stumbled then fell back from the impact. Einar slowly knelt placing a hand each on his sister and friend.

“Are you two okay?” he asked shakily. Both nodded.

“They were in the house.” Aelric said as he got to his feet then helped Ailla up.

Without another word the trio ran to the house Ailla rushing through the doorway before either Aelric or Einar could stop her. Her wail split night almost as terribly as the ghoul’s. Their father lay face down on the floor his tunic ripped the shreds, the flesh of his back sundered, exposing his spine and rib. Their mother lay in bed, her throat ripped out and her lifeless eyes staring at the ceiling, a look of horror still marring her face.

Einar closed his eyes and bowed his head trying to swallow his rage, his fists balled so tightly that his nails drew blood upon his palms. With a growl he turned and grabbed his father’s axe from the rack near the door and stomped back into the moonlight. Aelric gently ushered Ailla from the home and the two followed Einar as he stalked back towards where they had left the beast.

It was gone, the ground where it lay spattered with dark splotches of rancid blood. Einar’s axe, once embedded in the creature’s chest now lay on the ground itself covered in the rotten smelling blood.

“Shit.” Einar muttered. His rage ebbed but he knew he could not give in to grief yet. His parents needed to be tended to and Hommlet had to be warned. He scooped up his tained axe then turned back to the house almost knocking into Aelric and Ailla.

“You two take the cart and head to the Halskar farm, stay there.” Einar said sternly before stalking off towards the corral at the far end of the walled in section. Inside an agitated horse and mule paced nervously.

“I can, and I will. We only have one horse. Tow of us will move to slowly.” Einar said as he saddled the horse. “Please just do as I say.”

Hommlet was only minutes away from the farmstead at a full gallop but Einar could tell he was too late. Shouts and the town’s bell greeted him as he sped past the outskirts. As he neared the village’s center a screams and angered cried rose to meet him. A dozen people burst from an alley. “A monster! A monster!” one woman cried. “It killed that boy!” a man yelled as he stumbled by.

Einar dismounted and dropped the bridle leaving the horse to its own fate. His focus was internal as the sounds of terrified villages faded into the background. An image filled his head a skeletal hand holding golden scales. Though his family wasn’t entirely pious his mother had taught them of the gods and their duties. Pelor and his control of the harvest was the most oft invoked on ant farm but the rough lifestyle on the frontier required a healthy respect for Kelemvor the god of the dead.

“Kelemvor give me strength to slay this abomination, and I shall be your servant.” Einar said aloud as he pulled his and his father’s axes.

He ran into the alley towards the sound of more shouting and screams. Now in the village square he could see a few bodies on the ground, a small boy torn to shreds. A man with partial armor as if he had been awakened and dawned only what he could before the fight lay missing an arm his face slashed and torn open. A third man sat slumped against the stone well in the center of the square his lifeless eyes fixed on distance his head swaying and jerking as the ghoul rummaged around his split open gut.

Einar loosed his father’s axe at the creature. His aim was off however and the blade only glanced the ghoul’s flank before clattering to the ground. The undead abomination whirled at hit and let forth another primal scream before leaping at Einar. Though it bore some new wounds it seemed unfazed as it quickly closed the few yards between them.

He swung at the vile creature but it easily batted away his axe and topled him over his axe dropped as they tumbled on the ground. They came to a stop with the ghoul on top its long fingers wrapped around his neck. His vision grew dark as he clawed at the beasts hands trying to pry them off. His lungs burned as they begged for oxygen.

A voice, soft but commanding filled Einar’s mind. ‘You have my strength young warrior, end this beast, none more should die this night.’ Suddenly as if he had remembered something long forgotten he knew how to stop the ghoul. Einar cleared his mind closed his eyes and let his hands slip from the ghoul’s. The creature snarled in victory. His eyes shot open, his fists balling then slamming together. A clap of thunder exploded between himself and creature sending it reeling. Einar gasped for breath and struggled to his feet. Another spell came to his mind and he raised his hand and spoke the incantation. A beam of purple energy shot from his hand striking the ghoul as it tried to rise.

The ghoul knelt, heavily damaged with smoke wafting from its charred chest. It tried to rise but was stopped by an axe splitting its skull. Einar left the axe in place as he stumbled back then fell to the ground. Deep gashes on his chest and arms seemed blood. His neck began to bruise showing the imprint of the ghoul’s hands. Villagers and militia began approaching the once again dead, undead.

Over the next few days Einar and his sister buried their parents and the village of Hommlet celebrated Einar as a hero. Over the next months however things returned to normal. Einar and Ailla sold the farm as neither had any desire to return without their parents. Ailla moved in with Aelric while Einar left. He had tried to explain to Ailla that he now had a duty to perform but she would not hear it.

One night nearly a year after his parent’s death Einar left the village of Hommlet only Aelric know his destination. He found himself in the city of Crown Point, at the shrine to Kelemvor and over the next year he learned of his new patron from priest there. His daily life consists of helping the priest with the rights of the dead, and studying the religions of the area. His free time is spent much as his earlier days. He drinks with travelers and traders, especially dwarves. 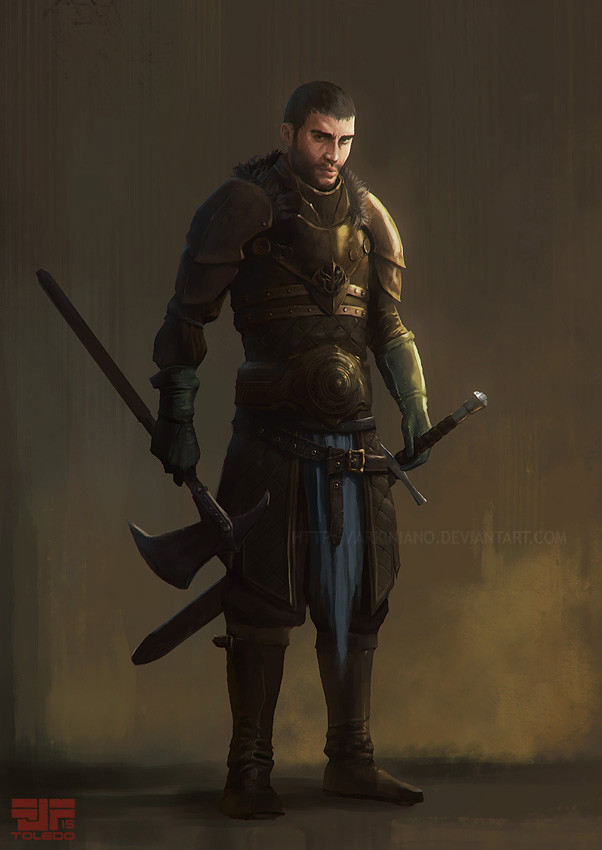